In May and June 2022, the second round of RUSTICA-workshops were organized in the 5 partnering regions: Flanders (Belgium), Pays de la Loire (France), Friuli Venezia Giulia (Italy), Almería (Spain) and Valle del Cauca (Colombia). In all of these regions, stakeholders from the agri-food, fertilizer and waste treatment sector were brought together to discuss potential value chains for innovative bio-based fertilizers.

In a first exercise, the regional bio-based fertilizer value chains were mapped by identifying key actors, their activities and processes as well as support services. In all regions, the value chain mapping revealed that some actors carry out multiple stages of the value chain. For example, municipal or intermunicipal companies are often not only concerned with collection and sorting of waste streams, but also carry out some waste processing activities such as composting or anaerobic digestion. Private or semi-private waste management companies are familiar with both collection and processing as well. Fertilizer producers do not only produce and blend fertilizers, but distribute fertilizers both directly to agricultural producers and indirectly through specialized distributors. Finally, some  farmers or farmer cooperatives carry out composting processes and thereby produce the fertilizers that they use themselves.

From these lists of actors, potential adopters of the RUSTICA bio-based fertilizer (RBBF) production technologies were selected. This selection, as summarized in Figure 1, was similar across regions. Stakeholders either identified individual potential adopters or an adopting network. An individual adopter could be a farmer, a food processor, an individual company, an intermunicipal waste management company, a private waste treatment contractor or a fertilizer producer. Adopting networks, on the other hand, could either be small or large groups of farmers, cooperatives (e.g. trade cooperatives and auctions), citizen associations or a cooperation between specialized waste treatment companies.

In a second exercise, barriers and drivers towards investment were discussed. They are summarized in a SWOT-analysis as represented in Figure 2. While stakeholders agreed that the return on investment (ROI) would be a decisive factor in adopting RBBF technologies for all actors, weaknesses and strengths differ for all of the actors identified in the first exercise.

Generally, stakeholders agreed that small waste producers such as farmers would not be as interested in adopting the RBBF-technologies as waste collectors, processors or fertilizer producers. Stakeholders stressed the importance of organizational barriers such as a lack of infrastructure, knowledge and time. Even if the investment would be interesting, operating a RBBF-production unit would be a burden to a farmer, processor or citizen as it requires time taken away from their principal day-to-day activities.

Some external drivers and barriers – or opportunities and threats – were also similar across regions. For example, in all workshops, high energy and mineral fertilizer prices were identified as a great opportunity for bio-based fertilizers. Additionally, the first-mover advantage and the opportunity to improve a company’s reputation were mentioned as opportunities, as well as the possibility to develop new partnerships. Common threats seem to be the lack of technology providers, unclear consumer acceptance of waste-based products and complex legislation. In addition to fertilizer registration and waste characterization legislation inhibiting companies from using residues as input material, the presence of animal-based products seems to be a hurdle: the required transformation of animal-based products imposed by the Fertilizing Product Regulation (EU) 2019/1009 may bring difficulties. This limits the possibility to use household waste for RBBF-production, as separation of organic residue streams would, in most cases, be too difficult. 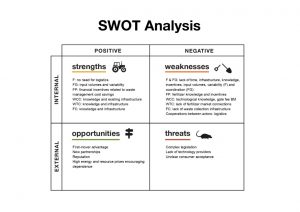 Finally, potential circular value chain configurations were mapped. Across regions, all stakeholders agreed that, in order to implement new bio-based fertilizer value chains, it would be easier to build on existing networks and business models. For example, both in Flanders and in Friuli-Venezia Giulia, efficient collection of fruit and vegetable streams is currently carried out by intermunicipal companies. As such, they could play a pivotal role in future value chains. In other regions, stakeholders stressed the importance of existing waste treatment and fertilizer companies as potential adopters of new technologies.

To conclude, there are many actors that could play a role in a new bio-based fertilizer value chain. However, it may prove hard to get everyone to cooperate given the current valuation of residues. For example, it is currently very cheap for farmers to leave their residues on the field, which does not provide them with any incentives to collect and treat their crop residues. Additionally, waste treatment companies benefit from their business model of gate fees, which does not motivate them to look into high-value applications. Nevertheless, the most feasible introduction of RBBF-technologies would build new cooperative relationships based on existing structures. For example, existing waste collection companies can use their expertise in a cooperation with technology partners or fertilizer producers. While the complexity of European and national regulations is a burden to be tackled, increasing fertilizer prices will certainly enhance the position of bio-based fertilizers.